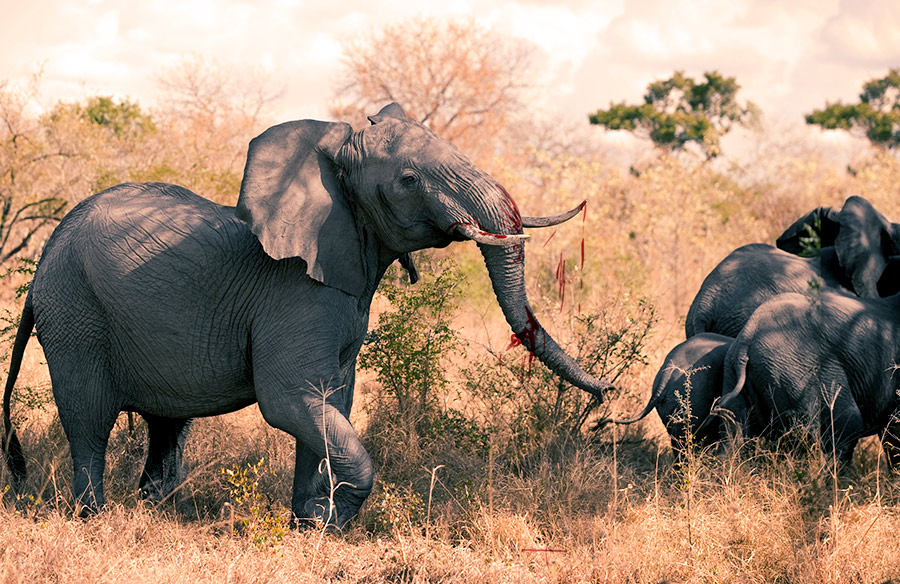 With the exception of hippos (and possibly African buffalo), elephants kill more people than any other large land mammal. On average they’re responsible for close to 500 deaths a year. Should you find yourself in the bush and in a face-off with an angry elephant, it’s probably a good idea you don’t make the situation even worse than it is.

Elephants are the largest land animal on Earth. The largest elephant ever weighed in at 24,000 lbs. It was a large male African elephant with a shoulder height of 13 feet and giant 11 foot tusks. The three living species of elephants evolved in Africa and Asia with not only deadly predators like lions and tigers… but also with humans! That means they have a long history of learning through trial and error how to survive in their habitats alongside some very formidable foes. They’re fully capable of living with us in part because of their ability to fight back with great force if needed. Unfortunately they can’t fight back against heavy artillery, helicopters and other high tech that poachers use to hunt and kill elephants. Consequently, these mighty creatures are threatened or endangered throughout their range.

Until recently there were two species of elephants – African elephants and Asian elephants. Due to genetic evidence, scientists now also distinguish smaller forest elephants as a unique species. For our purposes, I am lumping all elephants together. They share similar enough behaviors that learning how to deal with one will help you with the others, too.

The first thing to understand in all of this is that elephants are really intelligent – among the most intelligent on the planet. They learn from their interactions in the wild and with humans. They’ve also evolved beside humans in both Africa and Asia. Unlike the now extinct mammoths and mastodons, which evolved in their North American range mostly without humans, elephants have found an aggressive way to sustain their way of life and family structure.

Elephants are big and have a ton of power. They could crush most foes without much struggle, but they have developed a defensive strategy to avoid unnecessary conflict. I have observed elephants in the wild countless times, watching them go about in a peaceful way with their family group. They are certainly not out to get you, so to speak. In fact, they’re generally only aggressive when heavily poached. With all of this in mind, we can set the stage for interacting with elephants by examining a few behaviors and one defensive strategy – the charge!

Watch these elephant attacks to get a feel for what we’re talking about:

With elephants, there are basically two types of charges – bluff charges and attack charges. These are two very different things, and we’ll tackle the differences here.

Bluff charges are meant simply to stop a threat from advancing any further. The elephant wants you to know it means business, but isn’t going to actually attack you. It’s ears will be fanned out wide, making it appear larger. It will sway side to side, legs pivoting from one to the other, doing what is known as “displacement activities.” Its trunk will not be pinned up and under its body, but instead swaying side to side or hanging down below the elephant.

In an actual charge where the elephant runs at you, trampling and impaling you with their tusks, it will precede all of this with a very different display behavior. Its ears will be pinned back on its head. The trunk will be curled up under them and inward. The elephant won’t display the so-called “displacement activities” that are mostly used to bluff charge. You’ll want to run!

Scenarios to Avoid with Elephants

If you see a herd of elephants from afar, you should keep your distance and give them plenty of space. However, there are a few particular scenarios that are even more prudent to avoid.

The Most Dangerous Elephant

The most dangerous situation is to encounter an aggressive or aggravated elephant – essentially an elephant that isn’t interested in just bluff charging you. Elephants can get mad for a variety of reasons, just like humans get mad on bad days. For instance, they may have encountered poachers in their last human interaction- and that could influence their behavior. They could also be hungry, hurt or scared. You definitely don’t want to spook an elephant! Whatever the cause, you especially want to avoid  these massive (up to 12 tons) mammals when they are not behaving in a typical calm manner.

How to Survive an Elephant Attack?

If an elephant does attack-charge you, it will use its tusks to gore you, throw you and crush you. It will often keep stomping until you’re dead. Since elephants can plow down trees, flip cars, and run up to 40km an hour, you have little chance of outrunning them. So your best bet is to read the signals early and recognize if you are seeing a bluff charge or a real charge. Here is what you do in each case.

If you read the body language and believe it’s a bluff charge, do the following:

If it’s not a bluff charge, you’re in serious trouble. This is what you’re best advised to do:

Fun Fact: Elephants are actually really scared of bees. If you have enough forethought, you might want to carry a big speaker system equipped with African bee sounds! Studies have shown they’ll back down if this sound is played. Even elephants with thick skin make it a high priority to avoid getting stung.

Here is another video of a bluff charge.

Why I wrote this elephant safety article

On a filming trip to Africa, Haley and I slept in a canvas tent within a protected camp that was then surrounded by electric fencing. In the morning, we were awoken by the local guards who informed us that elephants had destroyed the fence in the night. They essentially said they now had an elephant problem and that we were advised to move to the second camp.

While I knew little about elephants at that time, I could sense from the tone of their voice that the situation was serious. On the way out I looked at the fence. The elephants had cleverly pulled up the posts of the fence without touching the electric wires. This was my first look at just how powerful and intelligent these wild animals are when interacting with humans.