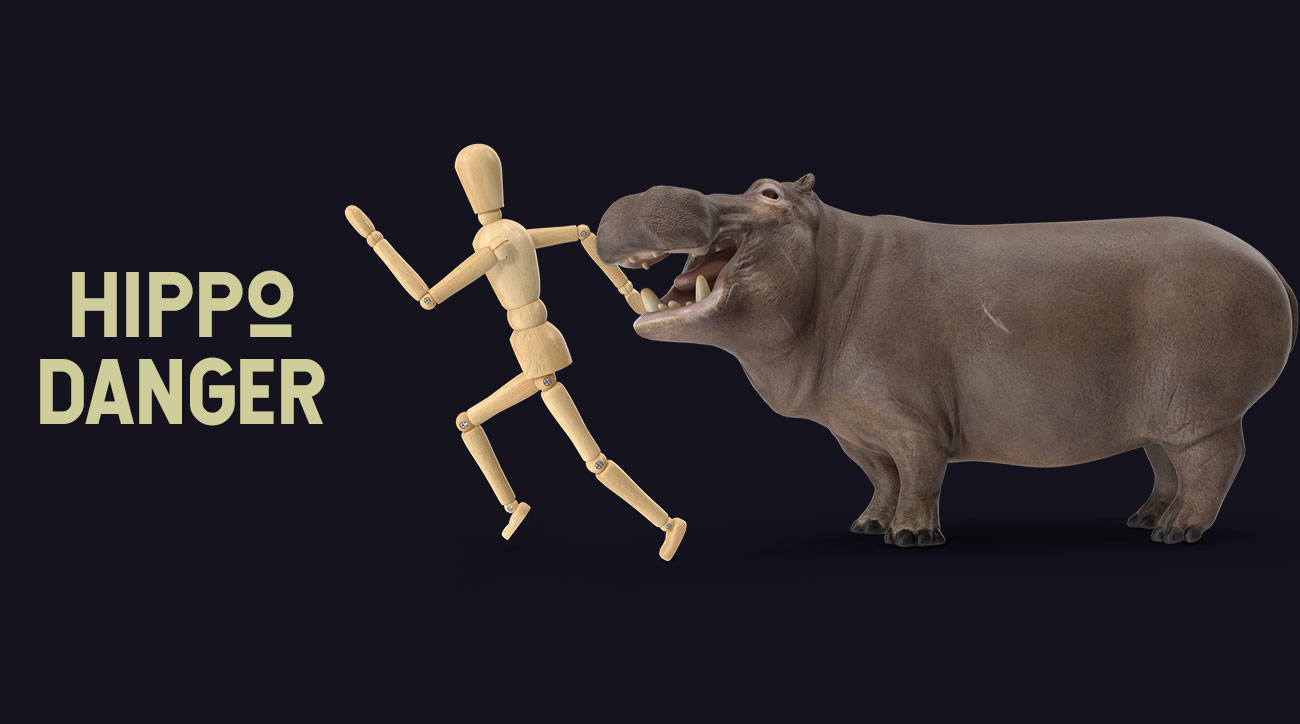 Hippos gained a reputation as gentle giants in early media portrayals. They were generally seen as slow, sluggish and peaceful herbivores that loll around their whole lives in the water. In Disney’s Fantasia, they’re seen as clumsy ballerinas… but nothing could be farther from the truth!

These massive beasts are, in fact, the deadliest large land mammal on Earth. They’re responsible for killing about 500 people a year in Africa!

Hippos are remarkable creatures. They look like water-born cows, but they are actually more closely related to pigs. They are the fifth largest land mammal behind the three species of elephants and white rhinos.

These semi-aquatic mammals can reach a height of 5.2 feet, 16.5 feet long and 9,900 pounds. At this size – there isn’t anything that can eat them! Even full sized Nile crocodiles (the dinosaur-like mega reptiles) are no match for a full grown hippo. There is no doubt that their aggressive nature is part of what has allowed them to successfully co-exist with crocodiles and other African predators.

The hippo has a unique set of teeth, as well. For an animal that typically eats vegetation, the teeth are in no way made for foraging grass. Instead, they tout giant canines that look more like that of a sabre-tooth cat. These teeth are used in aggressive displays and to fend off invaders. At over a foot and a half long, these teeth are extremely effective!

Typically a hippo eats grass along the shore at night, but they’re not just herbivores. They’ve been known to kill impala, kudu, eland, wildebeest, and buffalo on occasion. There is evidence that they not only occasionally eat meat – but are predators too. It has even been reported that they occasionally eat each other! Fortunately for us they don’t seem to hunt and eat humans, but death by hippo is far too common.

In 2014, as an example, a small boat of school children was attacked by a hippo. Thirteen school kids and one teacher died in the incident. As far as I can tell from the report, the deaths that occurred didn’t result in them eating the individuals, but they died nonetheless.  Attacks like this are unfortunately what make hippos the most deadly large mammal on the planet.

Hippos are also known to wander out of the water to forage on vegetation. They can eat about 80 pounds of grass a night so they can quickly deplete their local food sources. Scientists have tracked them traveling a kilometer or more a night looking for food.

Roaming activity like this has put them into conflict with humans. They’ve been seen chasing cattle and other large mammals. They also enjoy eating human crops.

Ideally you’ll want to avoid a hippo both on land and in water. That means you need to keep alert when you’re near a waterway. Looking for hippo signs – like poop and footprints – is a good start.

Don’t sneak up on a hippo. Save your “sneaking” for mega-predatory animals like lions, wolves, or polar bears who, if they see you, might want to eat you. Let hippos know you’re there. Hippos can remain underwater for 6 minutes or more. If you are swimming in the water or on a small boat and see a hippo surface far from you, slap the water continuously with an object like a paddle. This will alert the hippos to your presence and decrease the likelihood they might accidentally surface next to you. Don’t slap with your hands if you can help it – crocodiles (who are found near hippos) are attracted to splashing and they love hands!

A “yawning” hippo or “laughing” hippo is a sign of aggression that could precede an attack.

On land, don’t get between the water and a hippo.

Shallow water is a bad place to be. Hippos don’t actually swim  – they bounce off the bottom in a body of water. So in this case, deeper water would be safer.

Avoid mating season. It’s the worst time to encounter a hippo because the males are even more aggressive.

Stay away from calves. Angry mothers are no fun and highly aggressive.

The Most Dangerous Hippos

The most dangerous thing you can do is to navigate down a waterway that is choked with numerous hippos – especially waterbodies in the dry season. Give them space. It is in their nature to defend their territory.

How to Survive an Up-close Hippo Encounter?

Pablo Escobar, the world’s most infamous columbian drug runner, imported hippos from Africa to live in his backyard. Some of them escaped, and they’re an invasive species in the Amazon! There are reportedly between 40 and 60 hippos presently roaming the jungle.