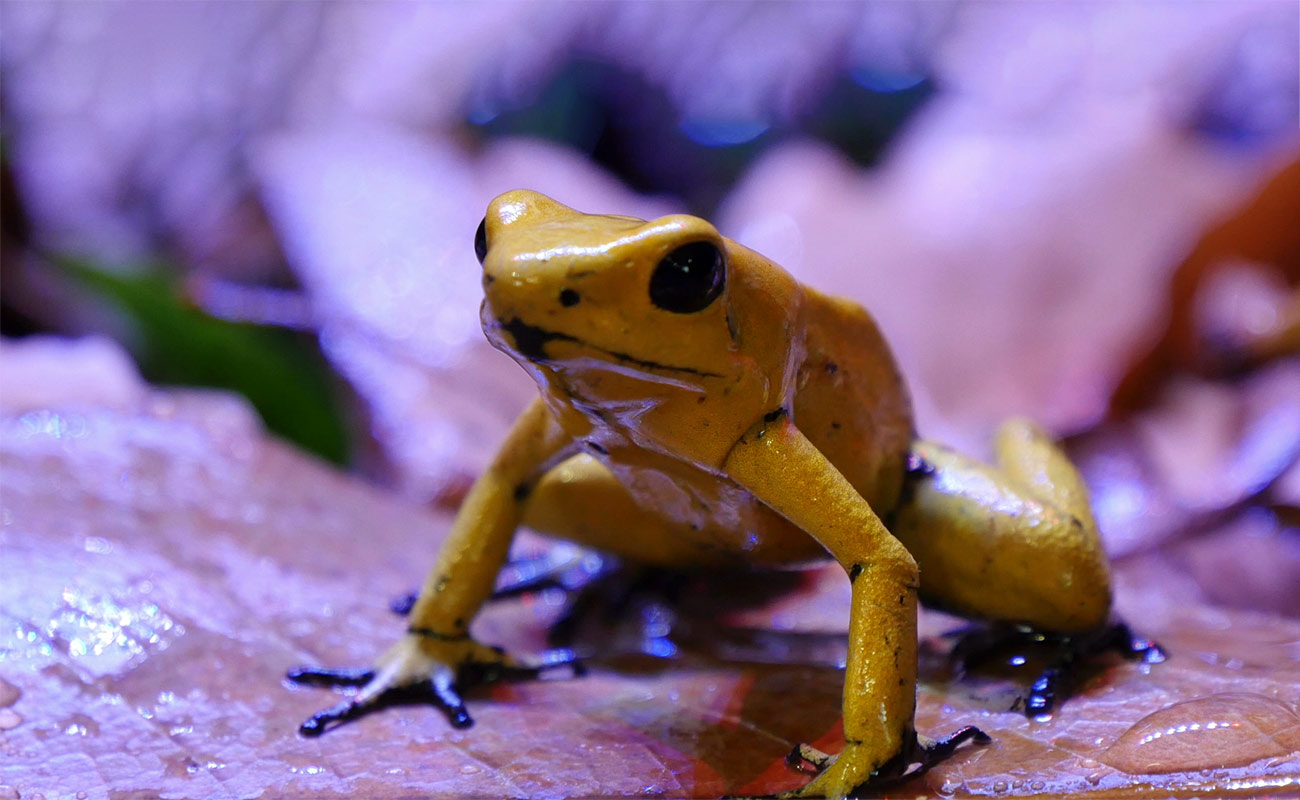 You just licked a poison dart frog? Now what? Are you going to live? Maybe not, but after reading this article you’ll know exactly what is killing you and why.

It seems odd to me that arguably the most toxic vertebrate isn’t anything that is in any way “out to get you.” Instead it’s a cute, colorful and passive little amphibian. The golden poison dart frog is said to have enough toxin to kill 10-20 men just by touching it. That’s a pretty amazing feat given that these frogs aren’t much bigger than your thumb!

One conversation I had nearly 20 years ago with a former Army Ranger forever fascinated me with the poison dart frogs. He described a training mission with a young recruit who died unexpectedly after getting a simple cut by his own pocket knife. As it turns out, a week earlier he had been messing with one of these poison dart frogs in the jungle – something I can tell you is not good for your karma. The result was a dead frog on the end of his blade. He never cleaned the blade, and in a terrible twist of fate, he cut himself with the tip of his knife. The toxin entered his skin causing cardiac arrest within a few minutes.

There are more than 200 species of little frogs that live in the neotropics that are collectively called poison frogs – or more colloquially, poison dart frogs. The latter name came from the fact that indigenous hunters would dip their blow darts in a concoction made of dead frogs to make their blow darts extremely lethal. Truth be told, this isn’t true for every species. Only a few have the intense toxicity for that. The most potent being Phyllobates terribilis – the golden poison dart frog.

This frog is bright yellow and it stands out dramatically in the forest undergrowth. This dramatic coloration is a type of aposematism – advertising with bright colors that they’re toxic! In fact, if you see brightly colored frogs, snakes or insects, this is generally a great indication that they’re highly toxic (or potentially mimicking something that’s highly toxic). That’s why almost every poison dart frog is beautifully colored.

If disturbed, they’ll secrete these toxic compounds via glands on their necks and backs. The most toxic compound is batrachotoxin (although there are a host of other toxic alkaloids as well). Just a small amount of it, the equivalent of two grains of table salt, is enough to kill a person. For perspective, this toxin is 1000 times more potent than cyanide.

Batrachotoxin is a toxic cardio and neuro-steroidal alkaloid. It works in their victims by destroying sodium channels – which is essentially how our nerves communicate with each other. This causes paralysis, and since you need your nerves to breathe and heart to beat it can result in cardiac arrest and respiratory failure. Plus, there is no antidote. Get it in your system and you’re likely dead in a few minutes.

Yet, in captivity they are completely harmless. These frogs could theoretically produce this deadly toxin when they are bred outside their native habitat – that is if they were given certain supplements or fed a diet more similar to their wild diet. That almost never happens though. The toxic alkaloids originate in their environment from their unique and not well studied diet. We still don’t know exactly what mystery insect they eat to produce the toxin. Possibly it’s a beetle, yet those beetles also accumulate compounds from something else – so the ultimate synthesizer remains unknown.

If you see any brightly colored frog in the neotropical forests, there is a good chance it’s either a poison dart frog or some other poisonous amphibian. Here is what not to do.

The Most Dangerous Poison Dart Frogs

The most dangerous is the golden poison dart frog. It lives in the untamed western pacific lowland rainforests of Colombia in one very small region about the size of New York City. It’s extremely endangered because of illegal collecting. Fortunately they are somewhat protected by the fact that it’s a hot spot for drug smuggling, illegal gold mining and general civil unrest. That simply means it keeps the average illegal poacher out – let’s just hope circumstances don’t lead to the extinction of this amazing amphibian.

How to Survive an Poison Dart Frog’s Toxin

These frogs aren’t going to attack you – don’t worry about that. This is an easy one – just don’t mess with them.

If, however, you get a dart in your hip from someone who used the toxin from a poison dart frog –  you’re in a very different situation. Scientists have found a way to inject certain amino acids found in these frogs into rat muscle to make them immune to the toxin, but that’s not something you can do after the toxin starts working in you. There is no way to counteract the poison post hoc, and it acts very quickly. Avoiding the situation is the best thing you can currently do.

I should note that not only are these frogs NOT out to harm you, but in fact, the toxins from many of the poison dart frogs can save you. There are a number of species in which scientists have used proteins in their toxins to make painkillers 50-100 times stronger than morphine. This is a tremendous breakthrough as morphine can bring with it a lot of side effects. While I always see saving frogs like this as a moral issue, in this case, it’s a clear benefit for us to learn as much as we can about their toxins for our own health.

You might enjoy this expedition to find the golden poison frog: It isn’t one of ours but I found it worthwhile to watch.

This article was kindly reviewed for accuracy by Herpetologist, Dustin Smith. Dustin is the head curator of reptiles and amphibians at the North Carolina Zoo.